All you need to know on how to fail at American Politics, is to watch a Transhumanist  run for office. It does not matter what country you are in, they fail no matter where you find them.

Considering we had an election cycle that cried for a third party candidate, and Transhumanists failed to fill that slot.

In my opinion, this could have been an election cycle for Transhumanists to win the Presidential Election, if we, as a community, had taken it seriously.

Instead, we offered a candidate, who made a caricature of what Transhumanism is. When you have a candidate driving around in a coffin bus, telling people that the main problem that they have is Death. I am sorry but this is something that is not going to sell anywhere. Our nation has serious problems to be solved and death is not the number one item to be solved. I know for the hard core Transhumanist that is not what you want to hear or believe but it is a simple truth.

To make matters worse, the political entities around Transhuman politics does not help either. Here is a quote from the TNC:

So for the TNC, a candidate driving around in a coffin bus, babbling about curing death, found a way to meet the maximum qualifications. This does not help anyone, we have to offer a candidate that has an ability to discuss all topics. That would include Economy, Foreign Policy, and Social Matters. Zoltan Istvan did not provide a single game plan for any of those topics. If you cannot find a candidate that has opinions on those core topics, Transhumanists will not win a major election.

The other item that we have to address is the utter failure of the Transhumanist Party. To date the Transhumanist Party has failed to provide any leadership, platform, organization and logistics. I know that Gennady Stolyarov II has done a solid job in the State of Nevada but it is not enough. Then to make matter worse the candidate Zoltan Istvan comes out and states:

I interviewed to be Gary Johnson’s vice president. … And I had a great interview with him. He had me over at his house overnight in New Mexico, and I had, like, a 20-hour interview. I would probably run under the Libertarian Party next time.

Your own candidate Zoltan Istvan does not want to run under the Transhumanist Party banner. This is what an Epic Failure looks like. If you cannot pull yourselves together, then shutter the operation and have everyone go as their own political unit. Right now, you are not helping our movement but hurting it. 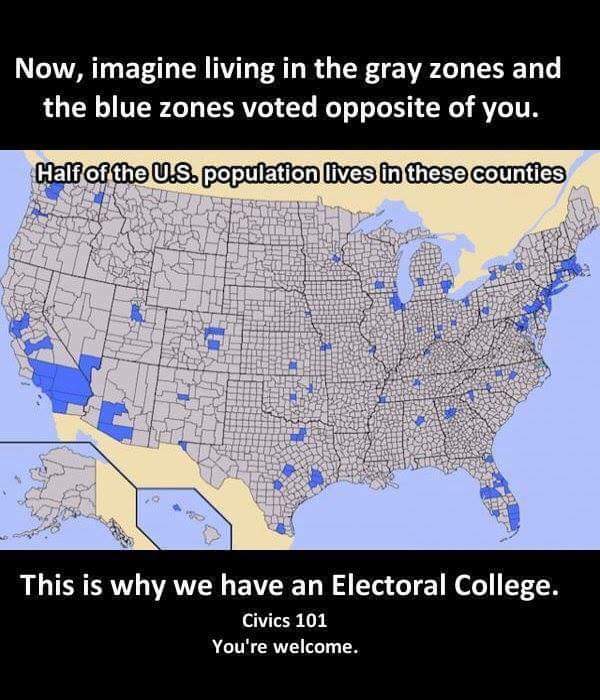 The very first image is an Electoral College map showing that Donald Trump won the election. The whining that Hilary Clinton won the popular vote, does not mean anything. We have an Electoral College system for a reason. It is to insure that all of the country has to be represented, I am sorry but winning only 19 States out of 50 States does not make you the President Elect.

I have tried for years, going back to my time in Zero State, that we need to have a conversation with the people living in Americas Heartland. The map above tells you why. All that gray  area on that map simply do not share our beliefs as Futurists and Transhumanists. That is not the problem of those people in the gray area. We failed them by not explaining who and what we really are and not just the caricature that Zoltan Istvan and other want the general public to believe.

It is my opinion that we need to embrace the Christian Transhumanists and help them communicate to their own people. It is time to provide logistical support to Micah Redding and or Lincoln Cannon to openly engage their Christian brothers and sisters. These people need to believe that they have a place in the Transhumanist Future.

It is important to accept failure and move forward with a new game plan. The top drown approach  has failed and accepting the failure is the only way to move forward.

Act Like You Have Been There Before – Transhumanist Party Follies

About Mike Dodd 236 Articles
I have a wide range of views and opinions. I have worked in a number of industries some of them are: Banking, Dairy, Health Insurance, Education and Government. I am the owner and editor in charge of a number of websites and message boards. The crown jewel of the websites is WaveChronicle.com which covers a wide variety of content. The Wave Chronicle is a site built to put forth thought provoking information, which can range from activism, politics, technology, philosophy, climate change, education, futurist / transhumanist theory and some fun articles that tend to be on the conspiracy theory side. Finally, I am also an accomplished no limit holdem poker player who sadly does not see enough time at a poker table.
Website Facebook Twitter Google+ YouTube

Inventions and Discoveries Out of Time – What might still be missing?

Did you know that Magnesium Diboride (MgB2) was first synthesized in 1953 and that it was discovered that it superconducts at a temperature of 39K in 2001? So what you might think. It’s just an […]

Denmark: How to stop the radicalisation of young people? – France 24

Subscribe to France 24 now: http://bit.ly/France24Subscribe FOCUS : Just two years ago it was ranked as the happiest country in the world by the United Nations. But since the Valentine’s Day shootings in Copenhagen, Denmark has […]

I thoroughly enjoyed this video by Dark5, regarding the Ebola virus. Guest AuthorAll Guest Author Posts are submitted or additional content Wave Chronicle has added to the website. To be a Guest Author please visit […]