Original Article By Club Of Info.

Lobbyists for big cable companies are lying to US lawmakers with the intent to destroy the free and open Internet, the only home true freedom of expression has ever known.

It is highly probable that if the Internet isn’t protected under Title II reclassification in the United States, the monstrous idea of slowing down the Internet to all but the highest bidder will burden not only the US but spread to the EU countries too. No matter what other political differences we may have among ourselves, it’s clear that our duty as citizens of the Internet is to stop them. This vital issue affects us all.

The specifics, as explained by Senator Ron Wyden:

I wrote the Internet Tax Freedom Act. So I want to set the record straight about the false claim being peddled by opponents of net neutrality. They are saying things that aren’t true to try to stop the FCC from acting to protect the free and open Internet.

The claim: If the FCC reclassifies broadband Internet access as a “common carrier” under Title II, consumers could be stuck with new taxes by state and local governments.
In a word: Baloney.

The bottom line: The Internet Tax Freedom Act will protect the Internet from taxes regardless of how the FCC defines Internet access.

The opponents of the open Internet aren’t quitting. But the good news: neither are we.

In order to counter the aggressive attempts by some inconsiderate lawmakers to push special interests ahead of the public desire for a free and open Internet, the US public MUST exert pressure of their own. Last year, US President Barack Obama took the side of the Internet, but only a tsunami of popular support for Title II reclassification of the Internet in the United States made this possible. 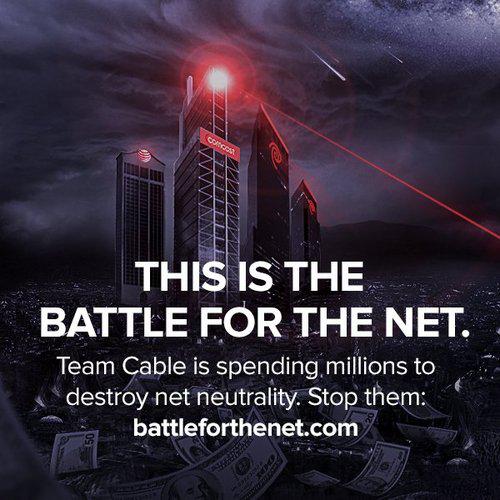 The solution Americans have is clear: put your own lobbying pressure on top cable executives and and lobbyists who are trying to ruin the Internet.

What you are reading isn’t an article of the more balanced kind, because the time for debate is over, and there is no space left for petty differences of opinion on this matter. It is a question of the very survival of the Internet in its correct form.

Failure to hammer the opponents of the Internet and protect this almighty instrument of the public, our means of achieving the freedom of expression that past body politics only fantasized of, would be unacceptable to all of us – particularly those of you who have become dependent on the popular Internet to communicate and unlock the truth.

Images via battleforthenet.com and Fight for the Future

Indian Rafale Deal: What Are Options For Pakistan?

India and France on Monday inked an inter-governmental MoU on the sale of 36 French fighter jets. According to a statement of Indian Prime Minister Narendra Modi, financial aspects and details of the deal […]

An Ocean Of Lies On Venezuela

On the eve of another US war for oil, Abby Martin debunks the most repeated myths about Venezuela and uncovers how US sanctions are crimes against humanity with UN Investigator and Human Rights Rapporteur Alfred […]

We have gotten to the point in our lives in 2014 that we need to have a Dummies book for American foreign policy. Let’s start with America looking to aid Al Qaeda in Syria. I […]