A most interesting question about Google’s role in teaching analytics came up. So I thought I’d share. It centered on the second video posted by Google Analytics Academy, but it was the 3rd installment that provoked my reaction.

Q: Can we trust what Google has to say about analytics since they own the algorithms that drive the most popular search engine in the world, and … set up a rival to Facebook. Is Google providing a public service by making their Web analytics software free, or is it part of a master marketing plan. What are your thoughts about Google’s instructional approach to analytics. Do we trust it, or learn from it with a wary eye?

I watched all the units in Google’s course. I think the second is useful for doing our everyday work. But looking for reasons … the 3rd turned my stomach. To be clear, I don’t believe Google set out to provide a service intended for malice. Sifting through the Internet is a pain, and they do fill a need. But as every coder knows, an algorithm is always jaded by the values and knowledge of the programmer(s). And ultimately, Google is in the business of cash.

We should also have some idea of where Google is actually going: Personalized searching with intuition (finishing your words). That’s good and bad. It eases our work, but it influences our thinking. So I question the worth of that last part:

a.) for *what it is* and;
b.) where a sales pitch like that drives traffic.

After all, Google nixed net neutrality in favor of the ISP a while ago.

Who knows what’s gonna happen … But if they’re serious about laying fiber, I’m sure they’ll want the odds in their favor. Which is kinda worrisome. Along with all their other bets, here in the U.S., we’ve been repeatedly told that fiber’s just too expensive. That we need to tolerate living with B-grade bandwidth. So if all that’s true, and infrastructure really is sky-high … then how do we know all these investments by some Internet hot-shot won’t affect the price of certain keywords? And come to think of it … does anyone even really know how much Internet advertising will cost in 10 years — besides Google?

On a side note, Google still has a ways to go. Just look at this screenshot, and ask yourself if Google should teach us about engagement and awareness. 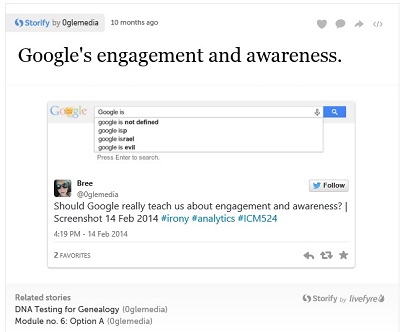 But back to the matter at hand…

As I see it, the main problem is that one corporation controls the data. Not just for individuals, but private and public sectors across the planet. Makes me wonder how Google will affect the espionage games that play out in the world of big business and state affairs, as it ages through the generations.

I should probably say that I use Google’s products more than I hang out on any social media website. But it’s contradictory since I’m suspicious of any financial entity exerting this kind of international control. So while I find their service all too convenient, my heart and my mind says that if Google continues to maintain and increase it’s position of power, it’s going to get protested — somewhere down the road.

Philosophically, it’s just not kosher for any one individual or entity to violate privacy for profit. Technically, it’s despotic to continuously track an individual. And depending on circumstance … it’s more or less an act of espionage or war, when perpetrated against a state or private business. So in this light, it’s real simple to understand why the U.S. government forced its agencies to compromise Google in order to maintain state supremacy.

At the same time, the humble origins of Google is a hero’s story. And because of this, I think it aided in creating an atmosphere of laziness, that works against our vigilance to maintain the health of good democracy… and spread it around the world (I say that last part lightly).

Of course, at this point it probably doesn’t matter anyway … since the majority of the planet is infected with the rhetoric and discourse of neoliberalism (read Harvey and Chomsky). By and large, people seem more interested in playing Google’s game, than examining the bottom line.

For instance, the CPC of $.55 for the keyword “monsanto” is relatively cheap in comparison to “monsanto evil” at $1.64. This is great for Monsanto, but what does it mean for its detractors? 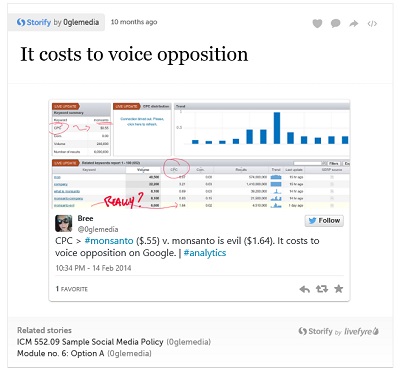 These things are unclear but I, for one, would like to know what happens when Google goes through a big change in management. What kind of people will control our information then? How will my children and grand-children fare in the bigger picture? And how much will it cost to voice opposition to the powers that be? Should I blindly trust Google’s ever-changing algorithms, analytic schemes and PR department … or should I just be myself and shudder at the thought? 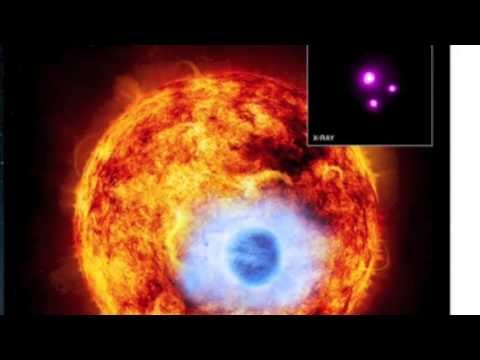 Five of the World’s Most Dangerous Chemicals – SciShow 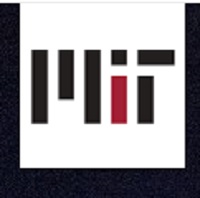