I have always been fond of the concept of feedback loops, and it is indeed the case that much of humankind’s progress, and the progress of a given individual, can be thought of as a positive feedback loop. In the technology/reason interaction, human reason leads to the creation of technology, which empowers human reason and raises rational thinking to new heights, which enables still further technology, and so on. This, I think, is a good way of understanding why technological progress is not just linear, but exponential; the rate of progress builds on itself using a positive feedback loop. 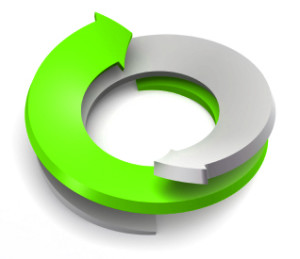 Negative feedback loops also exist, of course. For instance, one eats and feels sated, so one stops eating. One exercises and becomes tired, so one stops exercising. Thomas Malthus’s mistake was to view human economic and technological activity as a negative feedback loop (with the improved life opportunities that technology makes possible defeated in the end by overpopulation and resource scarcity). He did not realize that the population growth made possible by technology is a growth in human reasoning ability (more bright minds out there, including the extreme geniuses who can produce radical, paradigm-shifting breakthroughs), which in turn can result in further technological growth, far outpacing the growth in resource demands caused by increasing population.

I do also think that positive feedback loops play a role in the questions surrounding free will and determinism. For instance, the growth trajectory of an individual – the process of intellectual empowerment and skill acquisition – is a positive feedback loop. By learning a skill and doing it well, a person feels better about his situation and becomes more motivated to make further progress in the skill. How does it start? This, I think, is where the substance of the free-will/determinism debate has historically led people to be at odds. In my view, free will plays a crucial role, especially at the beginning of a chain of undertakings, in the individual’s choice to focus on a particular subset of reality – certain entities about which one would like to know more, or certain projects one would want to pursue further.

Generally, the choice to focus or not is always under an individual’s control under normal conditions of the brain and body (e.g., adequate rest, lack of physical pain, freedom from pressing demands on one’s time). A young child who chooses to focus on productive, mind-enhancing endeavors essentially sets himself up for a virtuous positive feedback loop that continues throughout life. The first instance of such focus could make a very subtle difference, compared to a child who chooses not to focus, and the other child could possibly catch up by choosing to focus later, but an accumulation of subtle differences in individual decisions could result in very different trajectories due to path-dependencies in history and in individual lives. The good news for all of us is that the decision to focus is always there; as one gets older and the set of possible opportunities expands, the harder decision becomes on what to focus out of a myriad of possibly worthwhile endeavors.

This understanding integrates well with the portrayal of free will as compatible with an underlying entirely physical nature of the mind. There is undeniably an aspect of the chemistry of the brain that results in human focus and enables the choice to focus. Yet this kind of physical determination is the same as self-determination or free will, if you will. My physical mind is the same as me, so if it is chemically configured to focus (by me), then this is equivalent to me making the choice to focus, which is how the virtuous cycle of skill acquisition leading to motivation leading to skill acquisition begins.

In general, in these kinds of recursive phenomena, it may be possible to legitimately answer the question of what came first if one considers not only the types of phenomena (A leading to B leading to A, etc.), but also qualitative and quantitative distinctions among each instance of the same type of phenomenon (e.g., a small amount of A leading to a little bit of B, leading to somewhat more of A with a slightly different flavor, leading to radically more of B, which opens up entirely new prospects for future feedback loops). We see this sort of development when it comes to the evolution of life forms, of technologies, and of entire human societies. If traced backward chronologically, each of these chains of development will be seen to contain many variations of similar types of phenomena, but also clear beginnings for each sequence of feedback loops (e.g., the philosophy of Aristotle paving the way for Aquinas paving the way for the Renaissance paving the way for the Enlightenment paving the way for transhumanism). History does repeat itself, though always with new and surprising variations upon past themes. In the midst of all this recursion, feedback, and path-dependency, we can chart unique, never-quite-previously-tried paths for ourselves.

On occasion I find items regarding the madness of Ayn Rand. Below is a video from the Ayn Rand Institute, in which you get to see and here the madness from Ayn Rand herself. Mike […]

The #1 Risk To Earth

Ben Davidson explains how the sun can trigger the #1 risk to earth, based on severity and likelihood, and the current state of earth’s magnetic reversal, including how our protection from solar energy is weakening […]