Over the past few years, the basic art of communication between citizens has failed. It has failed for all of the common reasons. You are defined by race, wealth, and other social political agendas. This has been done to keep the citizens in our nation divided, to keep us at our own throats, so we can lay blame for our lives at other peoples feet.

We can lay this blame for the creation of this social political agenda at the feet of our failed leaders, both Democrat and Republican. They offer our country no new path forward. They do not have a 21st century agenda, shit, they do not have an agenda for the next three months. What both parties hold dear is the past and the past that they both hold onto is varying degrees of Hate, Guilt, and Fear. 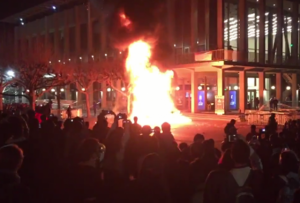 They use this Hate, Guilt, and Fear to preach a false gospel to every single one of us. It makes no difference if you are a Democrat or Republican, simply the demons and angels change uniforms based on what failed social political agenda you choose to believe.

A prime example is the Berkeley Riots over the Milo Yiannopoulos speech. First off, Milo Yiannopoulos is not the leader of the Alt-Right or Alt-White movement. A gun toting gay guy from London, is not leading dumb white hicks south of the Mason – Dixon line, in America.

What these dummies in Berkeley California accomplished was providing, the opportunist, Milo Yiannopoulos free publicity for the his next tour and the added money he will personally make from that.

What I have not even discussed so far is the actual content of Milo Yiannopoulos comments and speeches. Let me give the dumb ass liberals who tried to burn down a perfectly good college a truth bomb, Milo is a Centrist Liberal. The reason why you radical liberals cannot figure it out, is because of his tone, look, topics, and speech. He tells you uncomfortable truths about social political agendas, so he has to be a conservative, just so you extreme liberals can be comfortable in your own thoughts and lives.  Which all plays back to the beginning of this article, your demons and angels are the same side of the coin of the social political agendas of Hate, Guilt, and Fear.

You will rally endlessly regarding President Trump but you will not acknowledge why he won in the first place. Look at this map of the Electoral College Results: 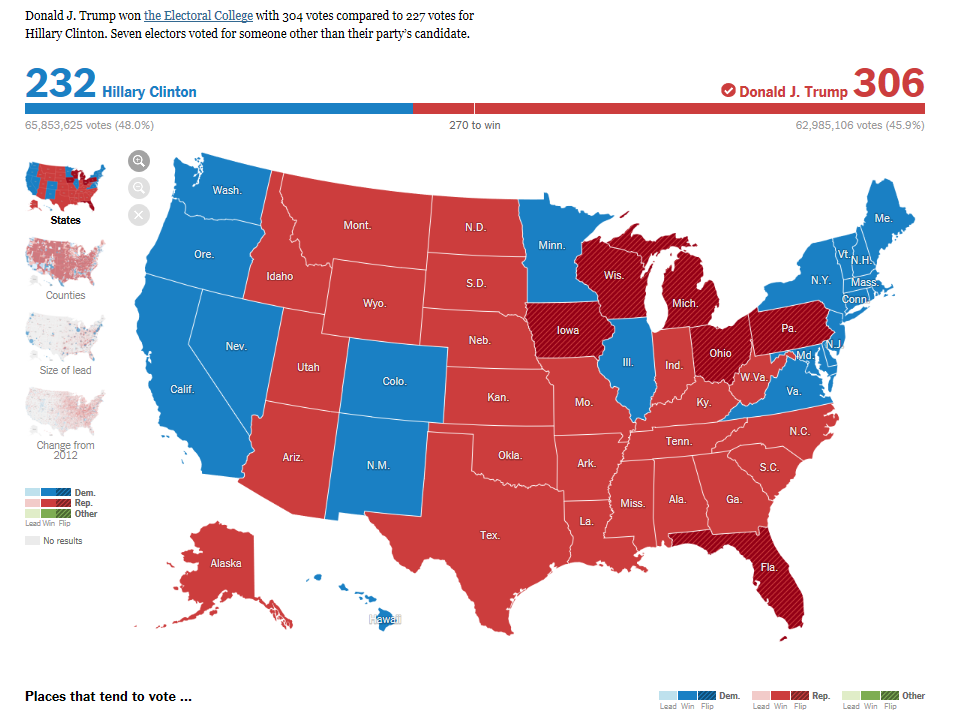 The liberal answer to this, is to force more liberal group think on the same population who voted against it, in the first place. It is a failed mentality, it is the false belief that the population within these states simply did not understand what they voted for and against. Believe me, these people in these 30 some odd States, know exactly what they voted for and against. They will take the same action again in two years and in four years and they will continue to do so going forward.

The Third Way is a new approach for communication in America.

As a progressive, this was not hard to figure out, you could see how and why Donald Trump was going to win and why Hillary Clinton was going to lose. You can see all of the failed social political agendas on both sides of the Democratic and Republican political establishment. You can see the United States of America, become the United States of Weimar.

As citizens, we need a third way to move forward to a more United States of America. We need to communicate without the social and political epitaphs and insults. Liberals once had an ability to speak to anyone and everyone. This has been lost but can be regained.

The Way of the Sea provides a path to communicate to anyone and have positive conversations going forward. We need to talk like a civil and advanced society. That we are all citizens of the United States of America, that we all want people to live in a positive society, where everyone can live fruitful lives. We can be better people by being less violent, more understanding, and more willing to acknowledge that not all people are doing well in our society and changes have to be made to help everyone, not just a select few.

Be The Third Way – Live Above The Social Political Agenda of Hate, Guilt, and Fear.

AMTV – Who is Milo Yiannopoulos

About Mike Dodd 240 Articles
I have a wide range of views and opinions. I have worked in a number of industries some of them are: Banking, Dairy, Health Insurance, Education and Government. I am the owner and editor in charge of a number of websites and message boards. The crown jewel of the websites is WaveChronicle.com which covers a wide variety of content. The Wave Chronicle is a site built to put forth thought provoking information, which can range from activism, politics, technology, philosophy, climate change, education, futurist / transhumanist theory and some fun articles that tend to be on the conspiracy theory side. Finally, I am also an accomplished no limit holdem poker player who sadly does not see enough time at a poker table.
Website Facebook Twitter Google+ YouTube

We Need To Talk About Search Engines

SHOW NOTES: https://www.corbettreport.com/?p=32480 Why does no one seem to understand the bigger picture of search algorithm manipulation. This isn’t about being able to work around search blacklists to find certain information, it’s about how we are […]

9/11 and the Belligerent Empire – Empire Files